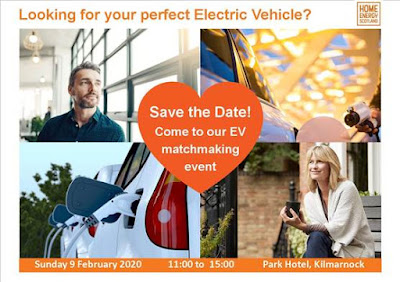 Home Energy Scotland south west are hosting a free electric vehicle matchmaking event on Sunday 9 February, 11am - 3pm at the Park Hotel in Kilmarnock.  Along with several dealerships showcasing their electric cars there will be  guest speakers, networking opportunities, prize draws and even tea, coffee and sandwiches – it’s the perfect first date!
Posted by Energy Agency at 03:05 No comments:

Salary: £32,029 per annum plus contributory pension

Primary Purpose: To continue with a research programme running since 2014. The post is to develop, implement and report on a matched controlled study evaluating the impact of the external wall insulation programme on property and health of the occupants as part of the Scottish Government funded projects mainly in south west Scotland.

Salary: £18,825 per annum plus contributory pension

Primary Purpose: The Customer Service Advisor will be employed on the Home Energy Scotland contract, based at the Energy Agency and will promote energy efficiency messages to householders in Ayrshire and Dumfries and Galloway.

You'll be part of a supportive team in a small but busy call centre. This is a target focussed environment which is mainly phone based dealing with both inbound and outbound advice calls. You will support our customers by providing them with independent and impartial advice about how to keep warm and save energy and money in their homes. In addition to this we operate an extensive events calendar throughout the year covering a wide variety of events across the area where you will deliver energy efficiency advice face to face with customers.

Posted by Energy Agency at 06:46 No comments:


We are proud to be celebrating 20 years of Energy Agency activities. Here are just a few examples of our highlights:-

We have always been forward thinking and came up with projects before they became mainstream. For example -
We were the lead partner with European Agencies back in 1999 with German and Finnish partners and still have connections with Germany today.  German interns have worked with us since 2011.

Around 65,000 pupils have had energy lessons since the year 2000. Some of the first pupils to receive a lesson are now age 31.

In the space of 6 years from 2013-2019, we have installed more than 6,500 External Wall Insulation systems. There were close to nil installs prior to this date.

Since 2004 we have won 12 national and international awards and been commended or runner-up for 7 awards.


We have celebrated our anniversary by unveiling a new brand identity which will continue to represent innovation, quality and customer care for the next 40 years.

The Energy Agency does not cold call, click to read more

The Energy Agency only visits householders by appointment and does not cold call.

Always ask to see staff identification when they call at your home.
Posted by Energy Agency at 03:28 No comments: